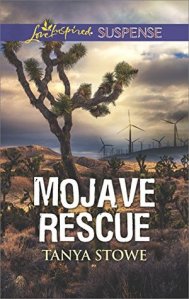 Brilliant, electronic warfare engineer, Drina Gallagher is riddled by guilt and determined to create a weapon to protect American soldiers. Caleb Norwood is a CIA agent working undercover. For two years he’s been trying to infiltrate a highly organized group selling secret plans on the black market. He’s scheduled to connect with operatives at a wind farm in the middle of the desert where he’ll be taken by helicopter to meet with the leader. He arrives at the meeting place only to discover the men have kidnapped Drina and plan to kill her. Cal must make an instant choice, keep his cover and stop the organization or save Drina. Cal chooses Drina. They race across the Mojave Desert to escape the killers and Drina discovers that Cal is a man of action grounded in unbreakable faith. His personal walk gives Drina the confidence she needs to confront the guilt of her past. Can He possibly forgive her and allow her and Cal to escape their pursuers? Or will all her hopes and dreams die in the desert?

I really enjoyed Mojave Rescue. Cal is a swoony hero; upright, protective, godly, a little bit wounded. Drina is a smart driven woman who still manages to be likable. She doesn’t know how beautiful she is and struggles with being enough, something I think many woman can relate to. The action is steady, as is the romance; both kept me turning pages. The romance was sweet, but just steamy enough to make your breath hitch. My only complaint is that the story was too short; I’d like very much to read more from both of these characters!

1. Here at Kat’s Corner books, we’re fans of cats, but love all pets. Do you have a pet?

Unfortunately we don’t have a pet right now. Our dog Kody was big, part malamute and wolf but he was very old and passed away. We were preparing to follow my husband’s work overseas and knew we would be selling our home and moving into a motorhome to travel the U.S. when we returned so we decided to wait to find another pet when we were more settled. That hasn’t happened yet!

Malamutes are so pretty and faithful pets. I hope you’re settled soon enough, at least for a goldfish or two!

2. Open your text message app. What are the first 10 words that come up automatically?

T. can’t make it tonight but we’ll go again when

Hahaha. You’re words actually make sense other than cutting off. You must not be able to make it a lot.

3. What was the hardest character to write in Mojave Rescue?

Believe it or not the hero, Cal Norton was the hardest to write. I knew him very well and he spilled onto the page originally but even though I thought his motivation…stopping the bad guys…was good enough, my editor wanted more. I had to dig even deeper.

The easiest was Drina Gallagher.  I think guilt is something we all carry at some time in our lives.

You did a great job with him too! A swoony, upright hero.

4. What inspired the idea for Mojave Rescue?

The rocket site where my husband worked twenty years ago. The platforms were set on a hill and designed to hold rocket engines for testing. At the time the platforms were abandoned and they were desolate and scary…the perfect setting for a mystery.

5. What do you want readers to take away from reading Mojave Rescue?

A sense of God’s grace. Even when we deny Him, He’s watching over us and He has a plan.

6. What is your current WIP?

My next project is tentatively called Fatal Memories. It’s set in the Sonoroan Desert of Southern Arizona. The heroine is a border patrol agent trying to stop drug traffic.

7. When you are not writing, what other “hats” do you wear?

Well, I’m a mom and grandma with 21 grandchildren so I stay very busy. I love to travel. I just returned from a trip to China. And I love to play pickleball!

Wow! I would love to travel more. And what a legacy with all of those grandbabies.

Tanya Stowe is an author of Christian Fiction with an unexpected edge. She fills her stories with the unusual…mysteries and exotic adventures, even a murder or two. No matter where Tanya takes you…on a trip to foreign lands or a suspenseful journey filled with danger…be prepared for the extraordinary. 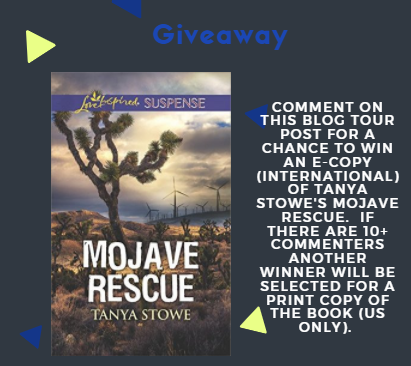 January 6-cherylbbookblog | Reading is My SuperPower

25th St looking 🤩 this morning.
Thanks to the staff and residents of Peabody Apartments for sharing your greenspace with us at last night's music series event. We were all grateful for the shade, good food, and time with neighbors. The next event will be held Tuesday July 13th at Saints Phillip and James Church at 6pm. The Rhonda Robinson Trio will preform. #charlesvillagelife #charlesvillage #mybmore
Peaceful morning underneath the Magnolia tree on St. Paul. 🌳🌺
Looking forward to welcoming @streetsmarket to the neighborhood.
Roses are in bloom! What are your favorite roses in the neighborhood? #charlesvillagelife
Not much longer until @busboysandpoets opens it's doors! Spread the word if you know someone looking for a job! #charlesvillagelife